Our corporate governance framework, which is deeply rooted in the Aboitiz core values of Integrity, Teamwork, Innovation, and Responsibility, has been institutionalized in the AEV Corporate Governance Manuals (Manual), Codes of Ethics and Business Conduct, and related governance policies and protocols.

Governance in Aboitiz is driven by a productive collaboration with AEV diverse and competent Boards and Board Committees, each supported by a capable and accountable management team and empowered team members. 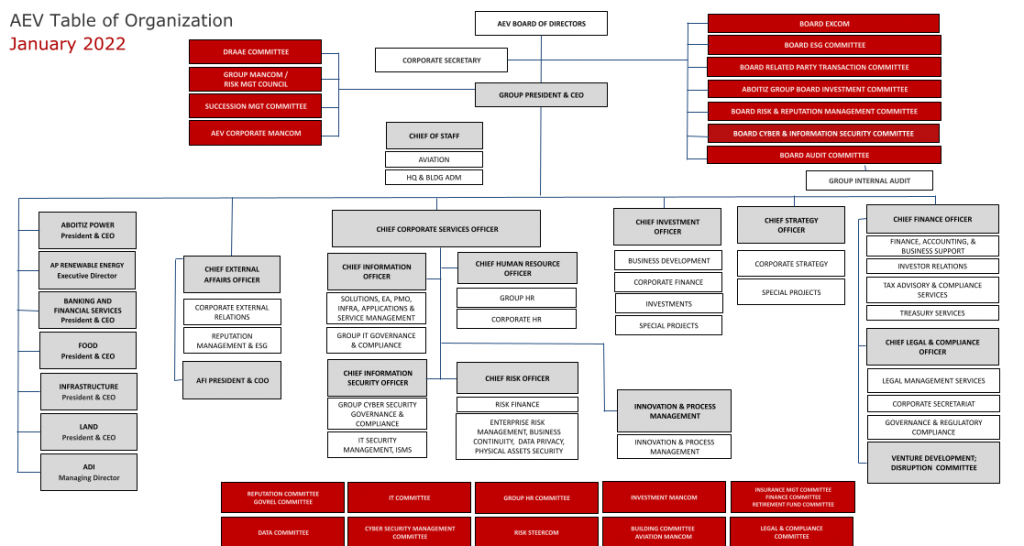 In 2021, the AEV Board reviewed the governance framework and implemented the necessary changes to implement effective governance in the Aboitiz Group and ensure that the Board is able to build on their companies’ future prosperity, adapt to the changing business environment, and carry out their strategic direction and growth aspirations. 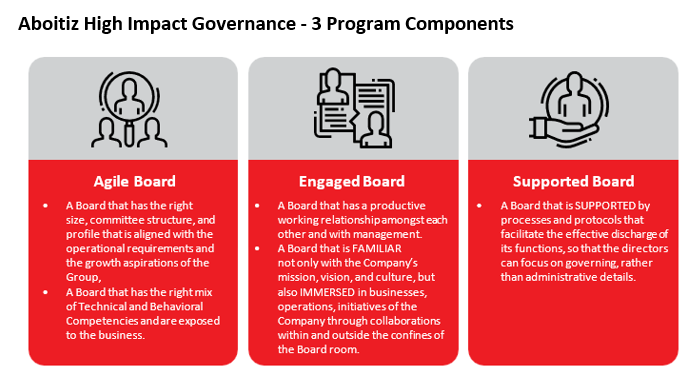 The AEV Board perform the crucial role of articulating and reviewing each company’s purpose, vision and mission, and strategies to carry out its goals. They ensure that the strategic direction of each company’s businesses are well defined, properly managed, and aligned with the overall strategic goals of the Aboitiz Group. Independent from management, they are committed to provide each company a strategic roadmap toward long-term growth, competitiveness, and building a sustainable business that will thrive for another 100 years. 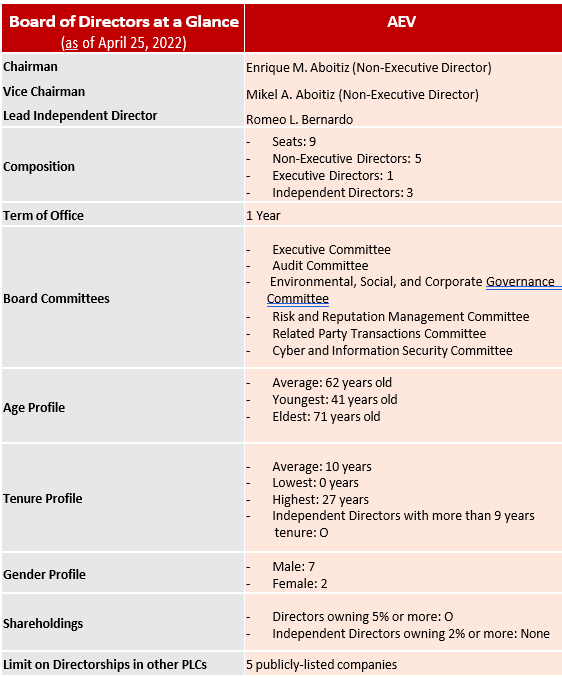 In 2021, the members of the AEV  Board of Directors were the following: 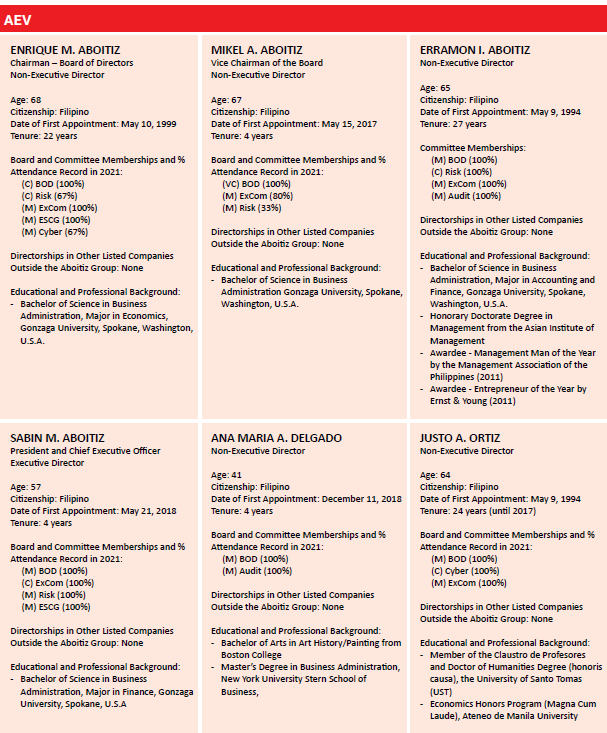 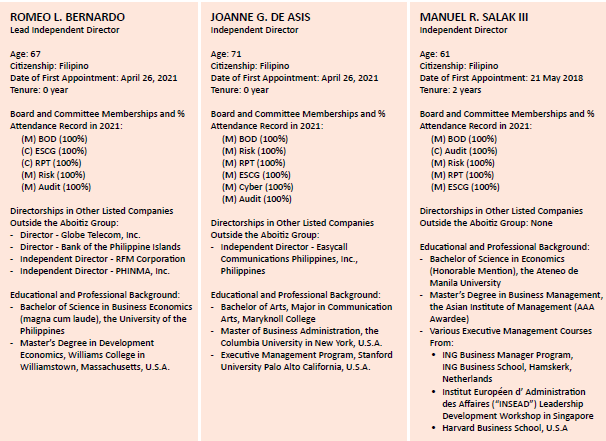 Commitment to the Corporate Mission, Vision, and Strategy

The AEV director acknowledge the importance of their role to lead and steer their respective companies as profitable and sustainable enterprises. The Board’s role for each company is to represent and protect the interests of its shareholders – the owners of the business – and other key external stakeholders. Guided by the Aboitiz Group’s purpose, brand promise, mission, and vision, the members of each Board, together with key officers and heads of the Strategic Business Units, participate in an Annual Board Retreat and Strategy Refresh. They review and align the corporate initiatives and strategic roadmaps of the Group’s core businesses with the contemporary market and economic trends, locally and worldwide.

Roles and Responsibilities of the Board of Directors

The Company believes that compliance with the principles of good governance begins with the Board of Directors.  The Director’s office is one of utmost trust and confidence. The Board of Directors is expected to act in a fully informed basis, in good faith, with due diligence and care and act in the best interest of the Company in a manner characterized by transparency, accountability and fairness in the exercise of leadership in directing the Company’s sustainable growth.

The Board is actively engaged in discussions of strategic business issues and the directors are consulted for their invaluable inputs through the special strategy board meetings and gatherings with the management teams.  The Board ESCG formalized these gatherings into an annual Board Retreat or strategy meetings in an atmosphere of relaxed, open, and intellectual exchange.

As part of its director development program and to ensure that the members of the Board remain up to date with business and legal developments, the Board is provided with regular legal bulletins and invited to economic and industry-specific briefings and strategy and management conferences within the Aboitiz Group.  All directors, including the Independent Directors, actively participate in corporate governance seminars to further enhance their knowledge and expertise.

By virtue of their respective Manuals and Committee charters, the Environmental, Social and Corporate Governance Committees of AEV were tasked to develop and recommend a set of corporate governance principles, aimed to promote the independence of their respective Boards, including standards and guidelines applicable to the selection, contribution, and conduct of Board members.

By virtue of their respective Manuals and Committee charters, the Environmental, Social and Corporate Governance Committees of AEV were tasked to develop and recommend a set of corporate governance principles, aimed to promote the independence of their respective Boards, where AEV is involved. Other factors considered are diversity of business experience, behavioral and technical competencies, background, age, and gender. The Board is composed of legal and finance professionals, engineers, former or current CEO/COOs, auditors, and accountants. Many of them have management experience in the private and government sectors, as well as in multilateral agencies.

Recognizing that a sustainable enterprise goes beyond the current generations of leaders, the AEV Board appointed Ms. Ana Maria A. Delgado as Directors in 2018. Ana is part of a new generation of homegrown leaders who add fresh perspectives to each Board’s deliberation. In terms of gender, AEV currently has two female members in the Board of Directors.

AEV complies with the requirements of SEC Memorandum Circular No. 19, Series of 2016, prescribing a maximum term of nine years for independent directors, starting from 2012. In the nomination, selection, and election of the members of AEV Boards recognize and respect the inviolable statutory right of each shareholder to vote and be voted as a director. If AEV intends to retain an independent director who has served a maximum of nine consecutive years, the shareholders of the relevant company shall be advised and provided with meritorious justifications during the Annual Shareholders’ Meeting (ASM) for which the election will take place.

Directorships in Other Listed Companies

The ESCG Committee, respectively, selects qualified nominees for election as directors. One consideration is the number of directorships a nominee has in other corporations or organizations. As a corporate practice, AEV directors, including Independent Directors, are discouraged from sitting as directors in more than five publicly-listed companies (PLCs). Executive Directors of AEV do not generally sit on other boards of PLCs outside the Group, unless they have substantial interests in those PLCs or have been elected as independent directors. The AEV Manuals require that the CEO and other executive directors shall submit themselves to a low active limit on membership in other corporate boards. In 2021 none of the AEV directors sat in more than five PLCs.

The Environmental, Social, and Corporate Governance Committee (ESCG, formerly the Corporate Governance Committee) of AEV is responsible for ensuring the establishment of a governance mechanism that promotes sustainability practices through proper environmental stewardship, social development, and sound corporate governance. The ESCG Committees also perform the functions of the Nomination and Remuneration Committees. In carrying out their duties and responsibilities, the ESCG Committee is supported by the company’s Compliance Officer, Chief External Relations Officer, as well as the Group Chief Human Resources Officer. These officers regularly attend committee meetings to act as resource persons. The chairmen of the ESCG Committees are the Lead Independent Directors.

The Audit Committee continued to provide oversight over the AEV financial reporting policies, practices and controls, and over the internal and external audit functions necessary for making good audit-related decisions. Chaired by independent directors, the Audit Committees are composed of all three independent directors and two non-executive directors. Each company’s Chief Financial Officer and Internal Audit Head, who performs the functions of a Chief Audit Executive, are regular attendees and resource persons at committee meetings. At the end of every Audit Committee meeting, Committee Members meet without any executive present.

The AEV Audit Committee assist their respective Boards in fulfilling oversight responsibilities over their company’s system of internal control. They are responsible for monitoring, overseeing, and evaluating the duties and responsibilities of management, the internal audit activity, and the external auditors as those duties and responsibilities relate to the organization’s processes for controlling its operations. In 2021, the President and Chief Executive Officer, Chief Financial Officer, and Internal Audit Head of AEV attested to the sufficient internal control and compliance system of their respective companies.

The Independent External Auditor of AEV is the accounting firm of SyCip Gorres Velayo & Co. (SGV), with Ms. Maria Veronica Andresa R. Pore as current audit partner who has served since 2017. As a policy, the Board Audit Committee makes recommendations to the Board concerning the choice of external auditor and pre-approves audit plans, scope, and frequency before the audit is conducted. Audit services of external auditors for the years 2021 and 2010 were pre-approved by the Board Audit Committees of AEV. The Committee also reviewed the extent and nature of these services to ensure that the independence of the external auditors is preserved.

The following table sets out the aggregate fees paid by the Company for each of the last two years for professional fees rendered by SGV:

The audit-related fees include assurance and services that are related to the review of AEV’s financial statements pursuant to its bond issuances. The non-audit fees were paid for AEV’s transfer pricing study and assistance in preparation of tax forms.

The Risk and Reputation Management Committee exercise oversight functions over each company’s enterprise risk management and reputation management, including their respective corporate brands and communication strategies. For a more detailed discussion on the Group’s top risks and 2021 key focus areas on risk management.

The Related Party Transactions (RPT) Committee of AEV is composed entirely of independent directors. The RPT Committee has the mandate to ensure that related party transactions are taken at an arm’s length basis and within market rates, with sufficient documentation, and coursed through all appropriate levels of necessary approvals.

The Executive Committee, organized in May 2018, are composed of five regular members, with at least two non-executive directors. The committees were formed to assist the Board in the management and oversight of each company’s day-to-day operations and strategic decision–making during the intervening period between full Board meetings. The President and CEO of AEV is the chairman of the Executive Committees.

The Board Cyber and Information Security Committee was established on March 8, 2021. It assists the Board in providing strategic direction and ensuring the establishment of the company’s system of governance (processes, policies, controls and management) on matters relating to information security and cybersecurity.

Please click here to view the Committee members and its charters.