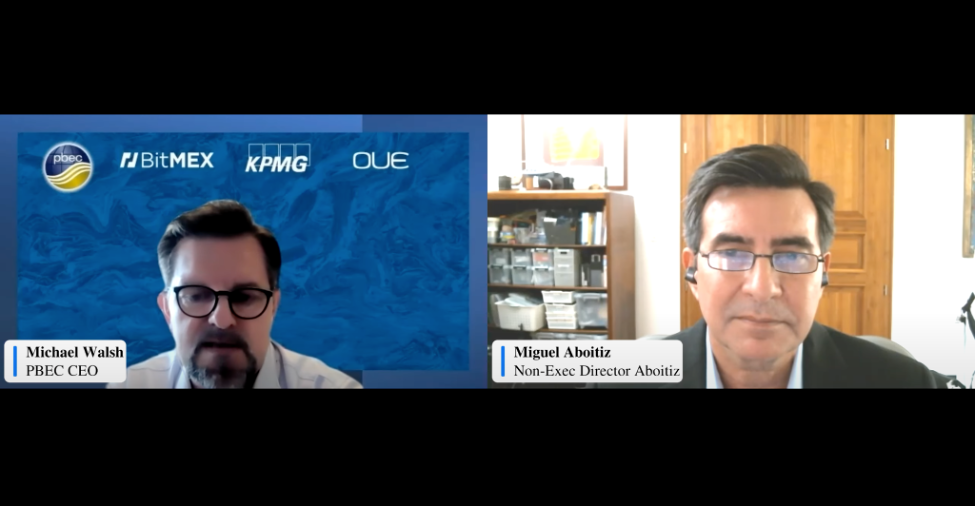 MANAGING UNCERTAINTIES. After the keynote presentation titled “Make it Happen in the Philippines”, PBEC CEO Michael Walsh (left) engages in a dialogue with Aboitiz Group Director and PBEC Director Miguel Aboitiz (right) on the Philippine economy, opportunities for investors, and the priorities of the Philippine business community.

For its 55th Annual Dialogues Summit, the Pacific Basin Economic Council (PBEC) promoted a unique kind of entrepreneurial leadership to wade through the challenges of the modern economy. From November 22 to 24, PBEC invited speakers from across the APAC region who exemplified leadership skills in identifying untapped opportunities and exploring unconventional strategies to talk on “Sustainable Economic Growth in the Age of Complexity”.

On Wednesday, November 23, the keynote presentation “Make it Happen in the Philippines” was given by Aboitiz Group Director and PBEC Director Miguel Aboitiz.

Before the keynote, in a pre-recorded opening, Aboitiz Group President and Chief Executive Officer (CEO) Sabin Aboitiz drew on his varied experiences from within the Aboitiz Group, as well as his role as a member of the APEC Business Advisory Council (ABAC) and convenor of the Private Sector Advisory Council (PSAC).

“With both ABAC and PSAC, I am very happy to report that much progress has been made both in cooperating with our regional neighbors and in addressing the economic challenges of our own country. As we begin to wrap up another tumultuous year for the world in general, we remain optimistic about the business outlook for the Philippines next year,” said Sabin. 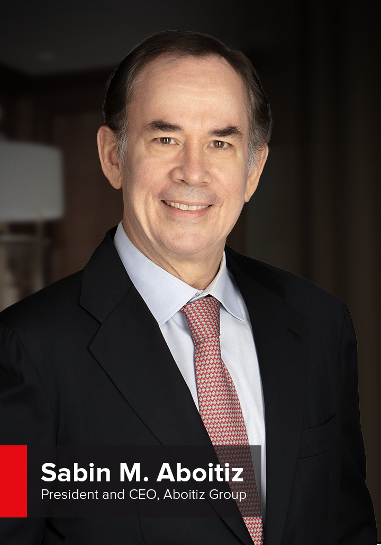 THE NEXT BIG THING. In a pre-recorded Aboitiz-led opening video entitled “CEOs on Why the Philippines is the Next Big Thing”, Aboitiz Group President and CEO Sabin Aboitiz extols the opportunities and strengths of the nation and its economy.

In the video, Sabin Aboitiz was joined by fellow corporate leaders of the Philippines, namely Magsaysay Group CEO Doris Magsaysay-Ho, Frabelle Group CEO Francisco Tiu Laurel, Jr., and JG Summit CEO Lance Y. Gokongwei. Together they cited the various reasons why the Philippines was dubbed the “next best thing in Asia” by Sabin Aboitiz in a recent speech he gave at the New York Stock Exchange.

“Two critical points will be the deciding factors to look out for: the reputation of our business leaders and the political will of our Chief Executive. We are all in this together. If both look out for each other to ensure there is integrity, transparency, quality and urgency in all the work that we do together, and in front of the eyes of our people and of the world, then we can finally remove the bureaucracies, the inefficiencies, the incompetencies, the inequalities, and the injustices that are the roadblock standing in between what the Philippines has been and what the Philippines very well will be,” concluded Sabin.

PBEC CEO Michael Walsh engaged in a lively dialogue with Aboitiz Group Director and PBEC Director Miguel Aboitiz, discussing the importance of alignment between businesses and the government in tackling the important issues of the time.

“The new government is pleasantly surprising many, both in and out of the Philippines,” announced Miguel. “The determination of the government is to use the private sector as a way to get things moving.”

“They’ve [the new administration] taken a pragmatic approach to say, ‘I’ll do it with the private sector because I can do the greatest number of projects at the same time and finish it, or get them started, before the next administration’,” Miguel added.

Miguel went on to paint a picture of the dynamic developments happening in the Philippines: in the energy sector, particularly in the field of renewable energy; the addition of telecom competitors in the industry; the large infrastructure projects that have been awarded, including the privatization of airports; the recovering real estate market; and the recovering banking sector, with the award of digital banking licenses and the digital transformation of previously traditional banks.